There's much debate about whether George Washington cut down his father's cherry tree or not. I recall drawing countless photos of the incident back in elementary school, so that means it's true -- right? Honoring our US Presidents was a big deal in the 1950s, when both Lincoln (February 12) and Washington (February 22) were celebrated with separate holidays on their birthdays.

In honor of the Father of our Country, my Mom always made a cherry pie for Washington's birthday. Her pie crusts were light and flaky, and I loved the filling, which she made from canned cherries -- not that pre-made cherry pie filling in a can. Oh, so tasty!

Farmer Bob has perfected his pie crust over the years, thanks to using Whidbey Island pie baker Shirlee Read's Never Fail Pie Crust recipe. So yesterday, in honor of the long Presidents' Day weekend, he made a cherry pie that we had Sunday night after dinner. And most likely we'll have another piece today. Yummy, indeed.

So Mr. President, thanks for sort of chopping down that cherry tree when you were six years old. We still enjoy a slice of pie or two around your birthday each year. Now, what about those wooden false teeth that you wore?

Mix together in a large bowl
*Farmer Bob uses all Crisco


With a pastry cutter, two forks or your hands, cut and toss the ingredients (do not mash!) until the fat is evenly distributed, but the texture is still rough.

Mix together with a fork in measuring cup
This mixture equals a bit more than 1/2 cup.

Add the liquid ingredients all at once to the flour mixture, and mix quickly with a fork using a tossing motion until all the dry ingredients are moistened equally. You can roll this out right away or cover with a damp towel and let it rest in the refrigerator for 20 minutes or so. It behaves better cool. When ready to roll out, divide the dough into equal parts, depending on the size of your pie pans.

To roll out crust, first flour your hands, the board and the rolling pin. Use plenty of flour. Pick up enough dough to fill the bottom and sides of your pie pan and quickly form it into a smooth ball, with sides and top nicely rounded. Place the ball on the floured board and flatten with the palm of your hand to start the nice round shape of your dough. Now pick up the floured rolling pin and, starting in the middle, roll evenly toward the top of the dough. Starting again in the middle, roll evenly toward the bottom of the dough. Back tot he middle again, and roll evenly to the right, then repeat to the left.

At this point, your dough should be evenly rolled out, with a start on a nice round shape for your pie pan. Pick the dough up, make sure there's enough flour under it, and put it back on the board. Now start all over again, always rolling from the middle to the edges. Feel with your hand for variable thickness, and correct with the rolling pin. When you reach the right size for your pie pan, use a flat scraper to lift one side of the dough and fold it over the other. Now pick up the folded-over dough, apt the extra flour off and set it in your pie pan, unfolding it to fit, with an inch overlap. Voila! Your bottom crust is done.

Now pick up another ball of dough and repeat the process, making sure to keep everything floured to prevent sticking. Put the filling in the prepared crust, place the folded-over top crus over the filling, and trim the edges (1" overlap). Pinch, crimp or otherwise join the two crusts and make a decorative edge to seal the pie. Cut vents in the top and put in the oven. You've successfully made a pie!

Mix together in a large bowl
Mix all ingredients and let stand in refrigerator while making your crust.
When ready to fill pie shell, remix again and pour into pie plate. Dot with butter before placing top crust.
Bake at 425F for 60 minutes or until pie begins to bubble. 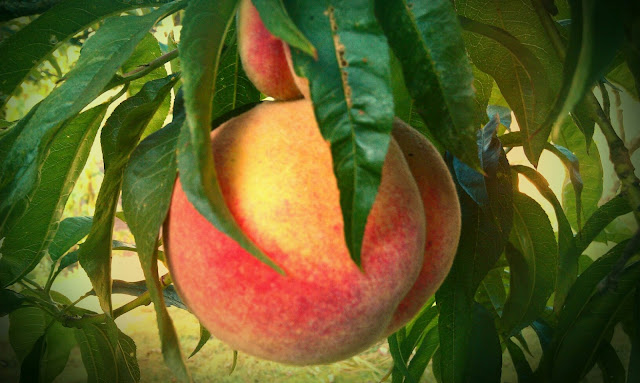