Farmer Bob started making this delish roast chicken a couple years ago, and it's become a staple on our table. Plus you can enjoy it for several meals after, especially if you're just cooking for one or two.

Bob first spotted the recipe on Anthony Bourdain's No Reservations show, now in its last season. The episode was part of a series about cooking techniques, and included Thomas Keller's Simple Roast Chicken.

Bob tweaked it a bit, but it's still the basic recipe from the celebrated owner and chef of The French Laundry in California's Napa Valley, a restaurant at the top of my dining bucket list. Here's Keller's recipe that's included in a very fun blog titled Almost Bourdain, followed by the Farmer Bob version. 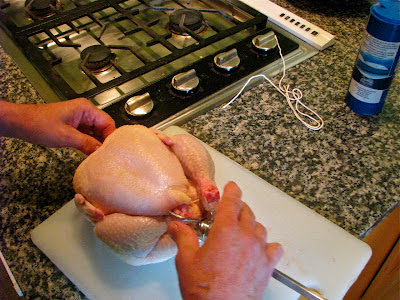 Buy one whole chicken, 5 lbs. or more
Take out giblets, rinse chicken and pat dry
Liberally salt inside and out (no other spices)
Truss chicken
Put on BBQ roasting spit
Roast for two hours or until 170-180 degrees
Let rest 15 minutes and carve
Alternatively, roast in 325 degree oven 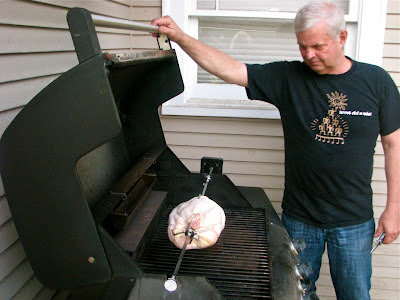