Travelin' with Farmer Bob can mean driving many miles for dinner 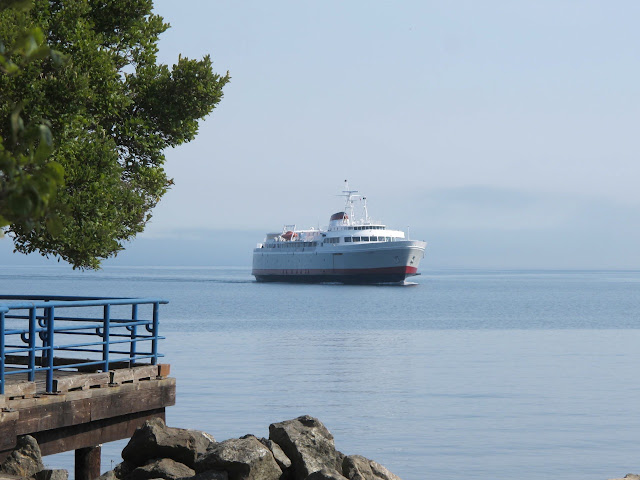 The M.V. Coho arrives in Port Angeles from Victoria. Photo by Sue Frause.

Things have been pretty quiet around our house of late, as Farmer Bob and I have both been on the road a bit. I spent three days in Port Angeles, WA and Victoria, BC last week -- taking the Black Ball Ferry Line between the two countries. It's a wonderful 90-minute sailing, and since my last trip aboard the 53-year-old M.V. Coho was 30+ years ago, it was fun getting reacquainted.

I stayed at my friend's inn, Fairholme Manor, located in the Rockland area of Victoria adjacent to Government House, followed by a night at the Red Lion Hotel Port Angeles. The weather was beautiful during this last week of summer, with the leaves just starting to change on the Olympic Peninsula. 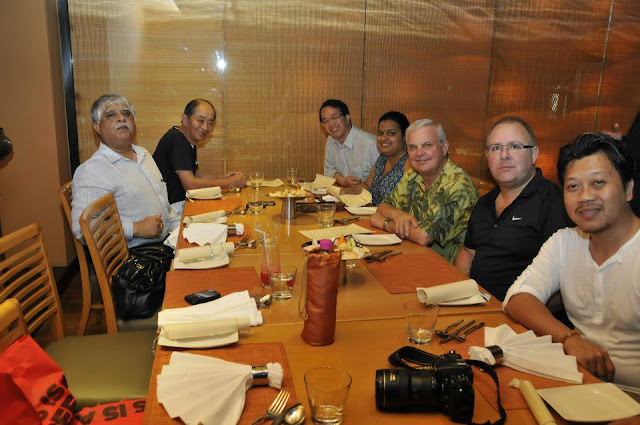 Bob, third from the right, at the PROI Asia meeting in Mumbai, India.

At the same time, Bob was in Mumbai, India -- returning on Sunday after nine days (interestingly enough, they still refer to it as Bombay). He was attending the Asia meeting of PROI, Public Relations Organisation International, of which he's the current president. Although most of the time was spent meeting with partners from India, Korea, Hong Kong, Japan and New Zealand, he was able to tour around this city of 22 million people.

Among the highlights was attending Ganesha Chaturthi, the great Ganesha festival, and going on a private, two-hour tour in the slum where they filmed Slumdog Millionarie (no photos allowed). He also visited Dhobi Ghat, the world's largest open air laundry. 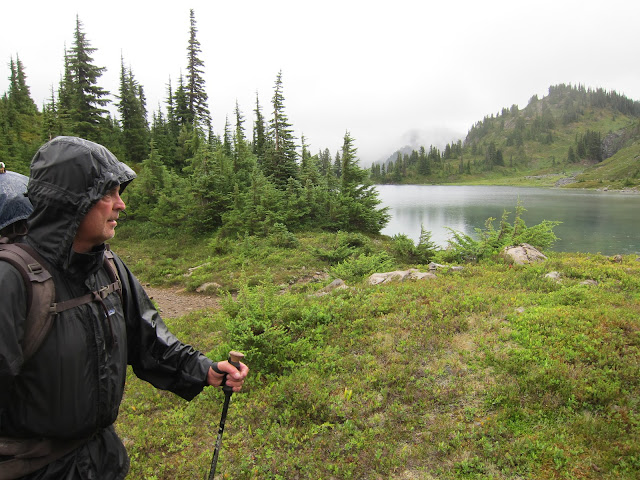 A stop at Lunch Lake. Photo by Max Frause

The week before flying off to India, Bob was about 7,800 miles from Mumbai, backpacking in Olympic National Park with our son Max and friends. They had a great three days during their 20-mile trek on the High Divide Loop (7 Lakes Basin), encountering sunshine, rain, snow and three black bears. But on the last morning of the trip, Bob realized he didn't have his car key -- it had fallen out of his pack somewhere along the way. With his car back at the trail head, and no key, he was stuck. Max's trio had arrived in a separate vehicle. Sue to the rescue!

I was in a meeting in Langley the morning of the mishap, and when I returned home, there was a voice mail from Kevin at Olympic National Park: "Your husband needs you to bring the spare car key to Sol Duc Trail Head around 2 PM." Oh, joy!

I called Kevin back to get the directions for the trail head, which is located about 30 miles beyond Port Angeles. It was now 12:30 PM, so I grabbed the spare key, hopped in my car and caught the 1:15 ferry from Whidbey to Port Townsend. Just after making the turnoff in Port Angeles toward Olympic National Park, my cell phone rang. Yup, it was Bob, and he had found the key. Well, somebody had. 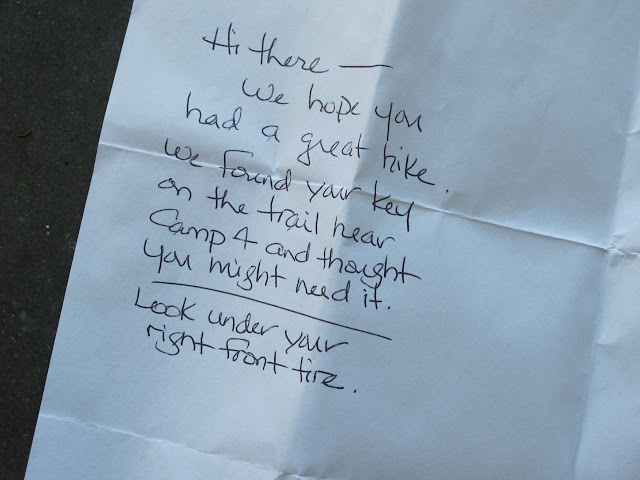 A fellow backpacker left this note in a plastic bag on Bob's car. Photo by Sue Frause.

Although obviously relieved not to have to drive an additional 30 miles, I was a bit disappointed not to be part of this heroic rescue operation. But with Bob and I both on the Olympic Peninsula, we decided to meet for dinner in Port Townsend before taking the ferry home to the island. I have to say it's the first time I've ever driven 140 miles for meal. So thanks for yet another adventure, Bob ... I'm happy we're both home safe and sound! 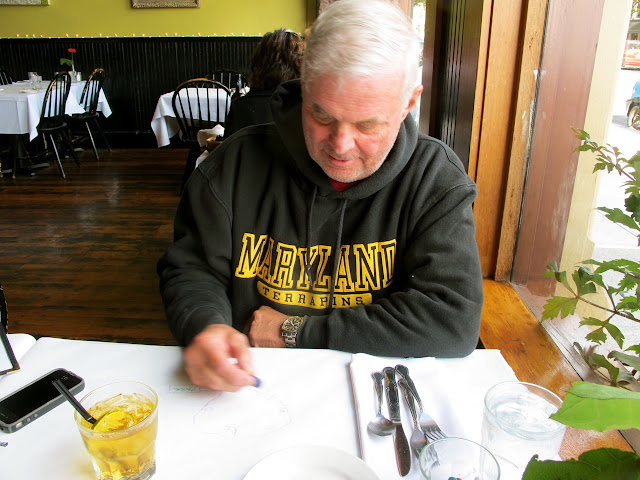