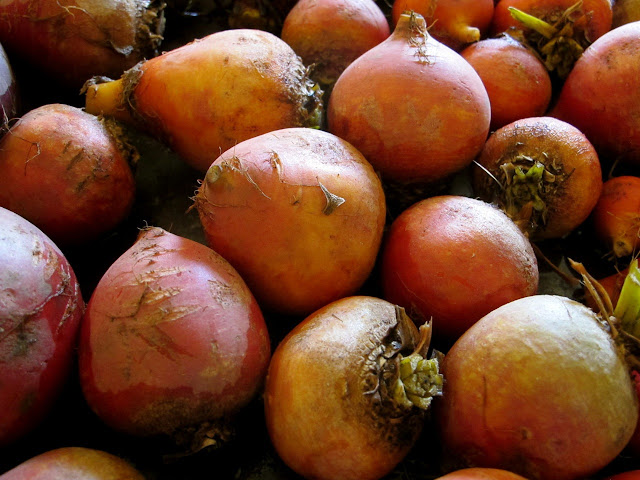 I'm not a beet lover. My first introduction to beets was at my Grandma Veilleux's in my hometown of Arlington, Washington. She was a wonderful cook and had a beautiful kitchen -- including one of the first dishwashers in town. But as much as I enjoyed most of her home cooking, I couldn't swallow those beets. Slippery and slimy, they were not the object of my desire, and it became an endless exercise in shuffling them around the plate, taking a quick bite and transferring the bits 'o beet to my napkin after feigning a coughing attack. To me, they tasted like dirt.

I don't think my mother cared for beets either, as she very seldom served them at home. So fortunately, it was an unwanted vegetable easy to avoid. I did warm up to them a bit when I first tasted Russian Borscht at the Russian Samovar on Seattle's Capitol Hill. The earthy vegetable was actually quite tolerable with the addition of other veggies and gobs of sour cream. Or maybe it was the romantic restaurant with murals on the walls and endless glasses of red wine that expanded my palate.

And then along came beet salads, still a common staple on many restaurant menus. I warmed up to beets even more with this menu item, especially when prepared with arugula, goat cheese and nuts. Although just a few small bites is really all I need, and then I'm on to the next course. My most recent foray into the purple 'n red root vegetable (aka beta vulgaris) was via Bob's Roasted Golden Beets, not a bit like those beets I tried to ditch back in the '50s. They're actually quite tasty, and I think my grandma would be proud. 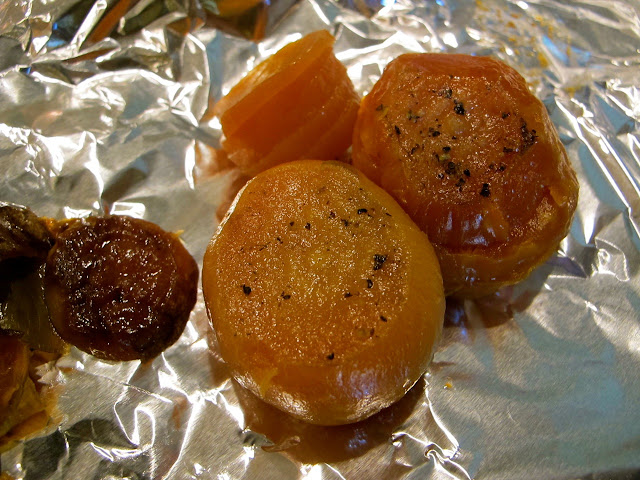 Wash beets and trim ends flat on both sides.
Place in bowl and coat with olive oil, salt and pepper.
Place beets flat side down on a sheet of foil large enough to be folded over all beets.
Seal foil on all sides.
Place on cookie sheet and put in 350F oven for one hour, or until beets are tender.
Let cool, remove skins.
Slice and marinate overnight in olive oil, vinegar and garlic.
Use as needed for salads, antipasti trays or other appetizer courses.
Labels: Cooking Farm and Garden