Cooking for Farmer Bob: A Birthday Dinner of Historical Significance 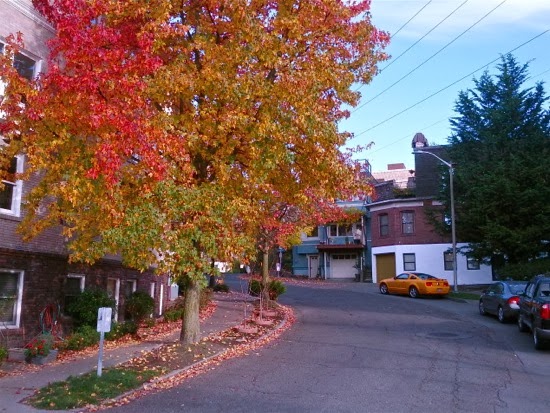 Capitol Hill, November 22, 2013. I liked this scene because the car matched the trees.
Photo by Sue Frause

Since Farmer Bob is the top cook in our kitchen, it's somewhat daunting to prepare him a special dinner. So for his birthday this evening, my simple menu is a throwback to the first dinner I made for him when we were dating in the early '70s.

I was renting a house on Seattle's Capitol Hill with three friends. It was at the corner of Belmont and Republican, just a few blocks off Broadway and close to many of my favorite haunts, including the DeLuxe Tavern. Outside of the pimps doing their nightly business from the apartment building across the street, it was an OK neighborhood to live in.

As a 22-year-old, my cooking repertoire was somewhat limited, having lived in a college dorm and then in a house of four young women with wide ranging culinary skills. It seems the biggest workout our kitchen got was from Mary Jo, who had the longest tresses of the bunch. Since we only had one main bathroom with a claw foot tub (and no shower), MJ could often be seen shampooing her hair in the big sink amidst the dirty pots and pans on the kitchen counter. Too bad I have no photo documentation of this time in my life, but it's still alive in my fading Technicolor memory.

The first dinner I cooked for Bob at the Belmont house was Beef Stroganoff. I don't recall the recipe I used, probably from my Betty Crocker Cookbook, but it took me a big chunk of the day to shop for and prepare the romantic meal (complete with candlelight). And no, I didn't use one of those Beef Stroganoff mixes -- it was all from scratch. I think Bob was pretty impressed.

Several years ago I made him a very fancy Beef Stroganoff for Valentine's Day: Saute de Boueuff a la Parisienne (Beef Saute with Cream and Mushroom Sauce), from Julia Child's Mastering the Art of French Cooking. This time, I'm going with something a bit simpler and easier to make. After all, it's a Monday night! 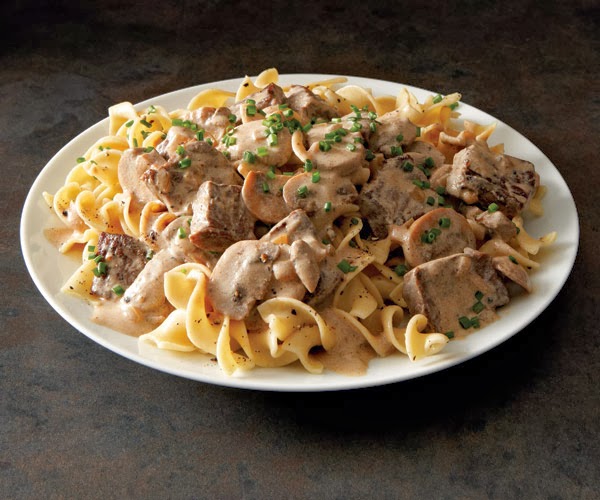 This classic stroganoff recipe features thin slices of sauteed beef with mushrooms and onions in a sour cream sauce, all served over buttery egg noodles. It's a rich yet homey meal that comes together quickly enough to make even on a weeknight.


TIP: Use reduced-fat sour cream at your own risk; it will likely curdle.

Bring a large pot of well-salted water to a boil over high heat.

Season the beef with 1 tsp salt and 3/4 tsp pepper. Heat 2 tsp oil in a 12-inch skillet over medium-high heat until very hot. Add half the beef and cook, stirring often, until the meat is just browned -- about 1 minute; do not overcook. Transfer to a plate and repeat with 2 tsp oil and the remaining beef.

Remove skillet from the heat. Add 1 Tbs butter and remaining 2 tsp oil to the skillet and stir until the butter melts. Put the skillet over medium heat and add mushrooms. Cook, stirring occasionally, until mushrooms release their liquid -- about 5 minutes. Add onions and cook, stirring occasionally, until the liquid has evaporated and the onions begin to soften -- about 3 minutes more.

Sprinkle mushroom mixture with flour and stir for 15 seconds. Stir in broth and bring to a simmer, scraping any browned bits in the skillet with a wooden spoon. Add sour cream and whisk until sauce is smooth. Add the beef and any juices from the plate to the skillet. Cook, stirring often, until sauce is barely simmering. Season to taste with salt and pepper.

Meanwhile, cook the noodles in boiling water according to the package directions, until barely tender. Drain and return to the pot. Off the heat, add the remaining 2 Tbs butter and stir to melt. Season to taste with salt and pepper.